Every winter in Sweden people cower in terror as the vinterkräksjuka (calicivirus) sweeps across the land like a plague of angry ducks (or whatever image appeals to you). I’ve watched people for years as they scatter in terror, washing hands frantically, avoiding workplaces, avoiding breathing, to avoid picking it up. And I’ve wondered – bloody wimps, what’s wrong with them? Shure it’s only a bit of puking.

Thing is, I’m immune to the vinterkräksjuka. Or at least I thought I was.

Enter early Friday morning, when the contents of my stomach emerged from my mouth, going the wrong direction, and kept on doing that for a day. I lay on my couch, staring up and pitifully groaning, too ill to sleep or read or Netflick (that is the verb, I’m calling it). All I could do was dribble enough water into myself so that I could puke it all up again. 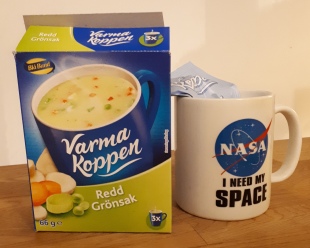 After a while, all I looked forward to was the vomiting itself, and the associated twenty minutes of feeling kind of okay that followed, before I descended into the valley again.

At one point, I really felt I needed to puke, but couldn’t face the old fingers down the throat. So I thought about bread. Just thought about it. And the floodgates dutifully opened wide.

Finally, a day later, it stopped. And some time after that, I felt I might try some food. Which I did – Knorr’s dried vegetable soup. It was like eating salty rainbows rolled in communion wafers. Marvellous.

Now, somewhat later, I am ready for the world again, wiser and a bit thinner. But I guess I learned my lesson – if you want to vomit, just think of bread. Mmm.

Interesting fact 2: Pronouncing vinterkräksjuka is one of the required steps in becoming a Swedish citizen, along with inserting snus one-handed, forcing yourself to like dill, and incorrectly pouring a pint of Guinness. So get on it, would-be Swedes!