I’ve always been vaguely irritated by the phrase “vanilla sex” and now I’ve worked out why.

For those of you who don’t ever read anything ever, vanilla sex means “normal” sex. You know, the whole act of putting it in and out and shaking it all about. Making the beast with the two backs. Shagging. Bouncing on the naughty trampoline. And so on.

More precisely though, it means “normal” sex when talked about by people who would really like to point out that what they do isn’t “normal” sex. That the basic act just doesn’t get them off as they are complicated and edgy. Hence vanilla, supposedly the most boring of ice-cream flavours, although personally I find chocolate more boring. 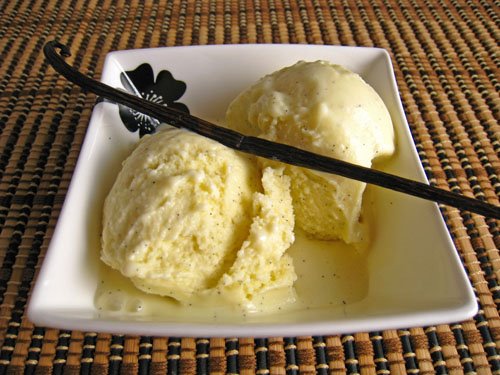 Now everyone may do whatever the hell they like in the bedroom, as long as it’s done between one or more consenting adults. I have no protest there. What bugs me is the vaguely disguised snobbery, the insinuation that my sex is boring whereas your sex is dark and interesting. I bloody hate snobbery. I don’t like wine “experts” telling me how their drink is superior to beer. Or literary book snobs who look down on science fiction because it’s “far-fetched” while reading every unlikely detective story or magic realism novel that exists. Or music snobs who look down their noses at what other people are enjoying, totally convinced those others are “wrong” but don’t yet realise it. 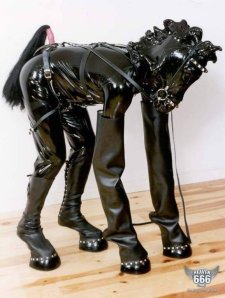 But sex is sex. If some people get off sufficiently on “normal” sex – and there’s a hell of a lot to do in that area – that’s fine. But if your senses have become so dulled, and your excitement pathways so hard-triggered that you can only get off if somebody is dressed like a latex horse, then I think the problem is yours and not mine. (Although, it must be admitted, latex is very nice.)

If you think I’m being too sensitive, think about this. Have you even heard the phrase “vanilla sex” being used by a person who isn’t into kinky sex, or used in a way that isn’t sneery or condescending? I haven’t. People who say “vanilla sex” almost always do it with a slight edge of superiority. They may not say it flat-out, but to them I am boring, and they are not.

Well, if you claim I’m boring, I claim the opposite. I claim my mind is expansive and creative enough to enjoy the feelings and act of sex without accessories, whereas your poor deprived noggin requires props and a lot of effort to feel what I feel. Just because I can get off on the basic act of copulation, and you need props or mindsets, that doesn’t make you more “complicated” than me. It just makes you different.

So enough of the “vanilla”. What I enjoy is sex. What you enjoy is sex with an added layer of mind-games, scenarios and props. So fuck away, just don’t look down on how I do. And let’s all try to live in sticky slippery salty harmony.

The kid (H10, soon to be H11) has been collecting wrappers from a certain chocolate bar for a few weeks now to enter a competition. 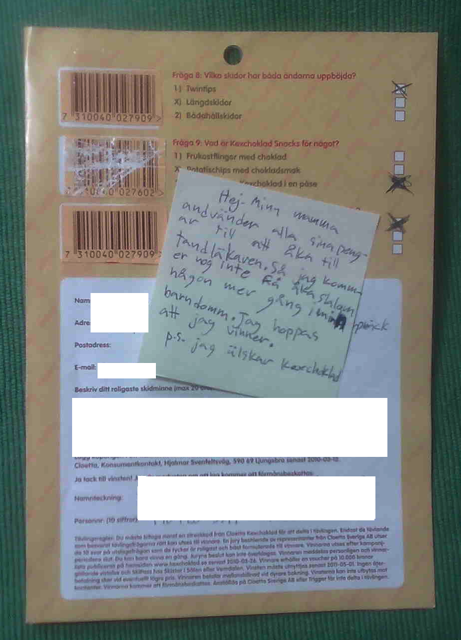 Basically you answer a few questions, describe your best ski-ing memory (I love it that all Swedes assume that you HAVE a favourite ski-ing memory) and then send it in with the wrappers and await the draw.

You stand to win a ski holiday. Or else a pile of chocolate. I know which I’d prefer.

But anyway the kid added his own touch to the form – a post-it note with a hand-scrawled text that says the following:

“Hi. My mum used all her money for the dentist and now maybe I’ll never go ski-ing again in my childhood. I hope that I win. PS I love your chocolate.”

He’ll go far, that kid. And he will always have chocolate.